What is loss aversion?

Loss aversion is our tendency to avoid losses more than achieve gains of equivalent value. Psychologically, the pain of loss is twice as powerful as the joy felt from a gain. Loss aversion plays a role in many types of decisions, from those we make in investments to politics to daily life. Loss aversion may have been important to prevent extinction for us as a species. Fear of loss is a powerful motivator, and we can leverage it in order to spur people to take action. During the weeks leading up to and following Russia’s invasion of Ukraine on Feb. 24, 2022, stock markets plummeted. Concerned about geopolitical uncertainty, rising energy costs, and inflation, some investors sold off stocks, effectively locking in their losses and missing out on potential gains that will occur once the market rebounds, which as of this writing, has already begun. Why? One potential explanation is loss aversion. 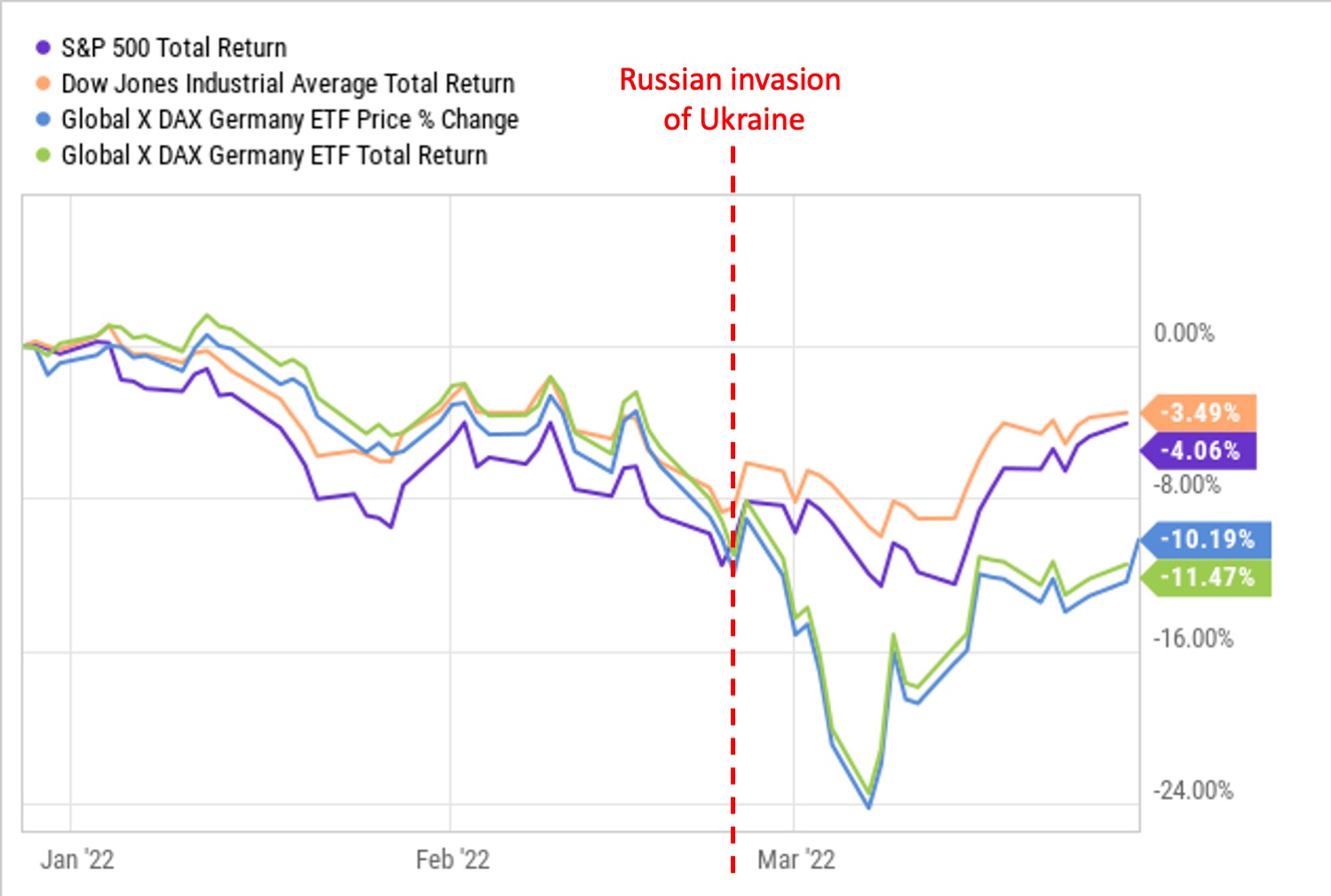 The stock market downturn before and after the Russian invasion of Ukraine caused some investors to panic and sell prematurely.

Loss aversion is our tendency to avoid losses more than achieve gains that are equivalent in value. It is a cognitive bias that can cause investors to overly avoid risk, choosing portfolios that do not deliver the returns they need for their financial goals as well as sell during stock market downturn like we recently saw. It can also lead to investors holding on to losing portfolios for too long to avoid realizing those losses.

The psychological basis of loss aversion is easy to grasp. We enjoy winning things, and we don’t like losing things. However, we don’t like losing things more than we enjoy winning things of similar value. In fact, we feel the pain of losing about twice as much as the joy of winning1, according to Daniel Kahneman, who alliteratively wrote “losses loom larger than gains” in his seminal paper on prospect theory with Amos Tversky2. 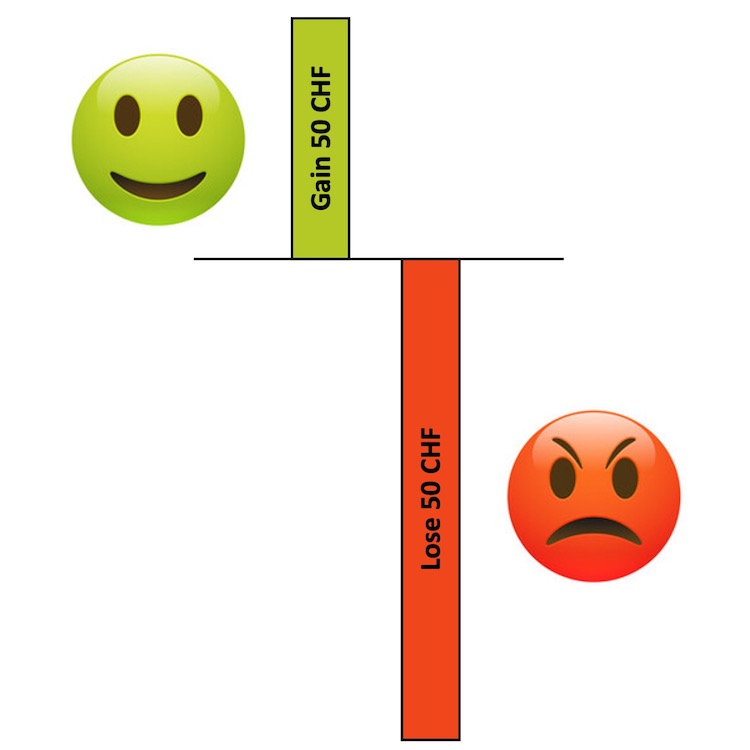 Here are typical gambles (or prospects) that were offered to participants in Kahneman and Tversky’s studies:

Which one would you choose? If you chose option B, then you’re with the majority, as 80% preferred to play it safe with a sure bet. Even when participants were explicitly told that the expected value of option A is $3,200, which is $200 more than option B, they still selected option B.

Now look at this set of options:

Which one would you choose now? This time 92% of participants chose option C.

From choices such as these, we can understand that people prefer to have a sure gain over a gamble for a larger gain, but they will take risks (or behave dishonestly3) to avoid a sure loss. This means people actually make choices that would on average lead to smaller gains and larger losses. Kahneman and Tversky’s prospect theory captures these preferences with an asymmetrical value function that passes through a reference point4: 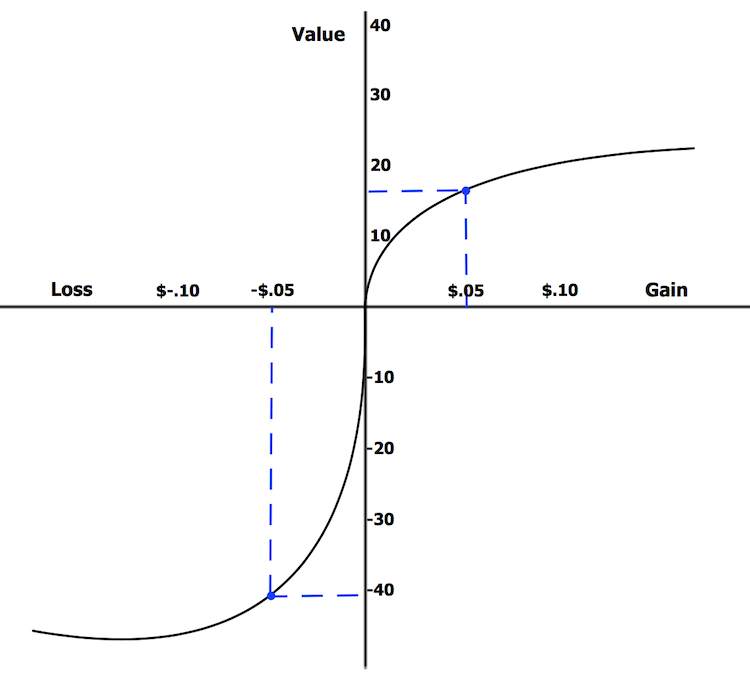 The value function is steeper for losses, indicating that they have a stronger impact4.

Loss aversion does not only affect investments or other monetary gambles. This cognitive bias can affect decisions ranging from politics and social policy (think of different decisions made during war time vs. peace) to daily life (think of how you react to praise compared to criticism or even how frequently you save an important document).

Kahneman and Tversky also examined people’s reactions to emotional stimuli. Here is another set of choices they offered to participants:

How would you respond? For this set of options, 72% participants chose option A to guarantee that two hundred lives will be saved.

With this set of options, 78% chose option D to gamble so that no one has to die. Of course, if you take a closer look, both sets of options are exactly the same. The difference is in how the options were framed for participants in terms of gains or losses, and this framing has a dramatic influence on choice.

A 2006 study found loss aversion-like behavior in Capuchin monkeys5. This suggested that loss aversion is innate - that is, it is an ancient feature of human preferences rather than a learned behavior.

Unfortunately, a follow-up study called into question this loss aversion-like behavior, as it is well-known from similar games that monkeys favor options where they see more food at first regardless of the eventual outcome, which they aren’t able to learn6. It is notoriously difficult to carry out loss aversion experiments with animals, as of course the probabilities of the gambles cannot be communicated to them, preventing tests with a variety of choices. Instead, animals must learn the probabilities underlying a gamble by repeatedly playing it.

Still, loss aversion may have an ancient explanation. For our ancestors who survived the harsh elements of the Stone Age and lived on the edge of existence, avoiding losses would have been key to preventing extinction, whereas an equivalent gain may not have ensured survival. 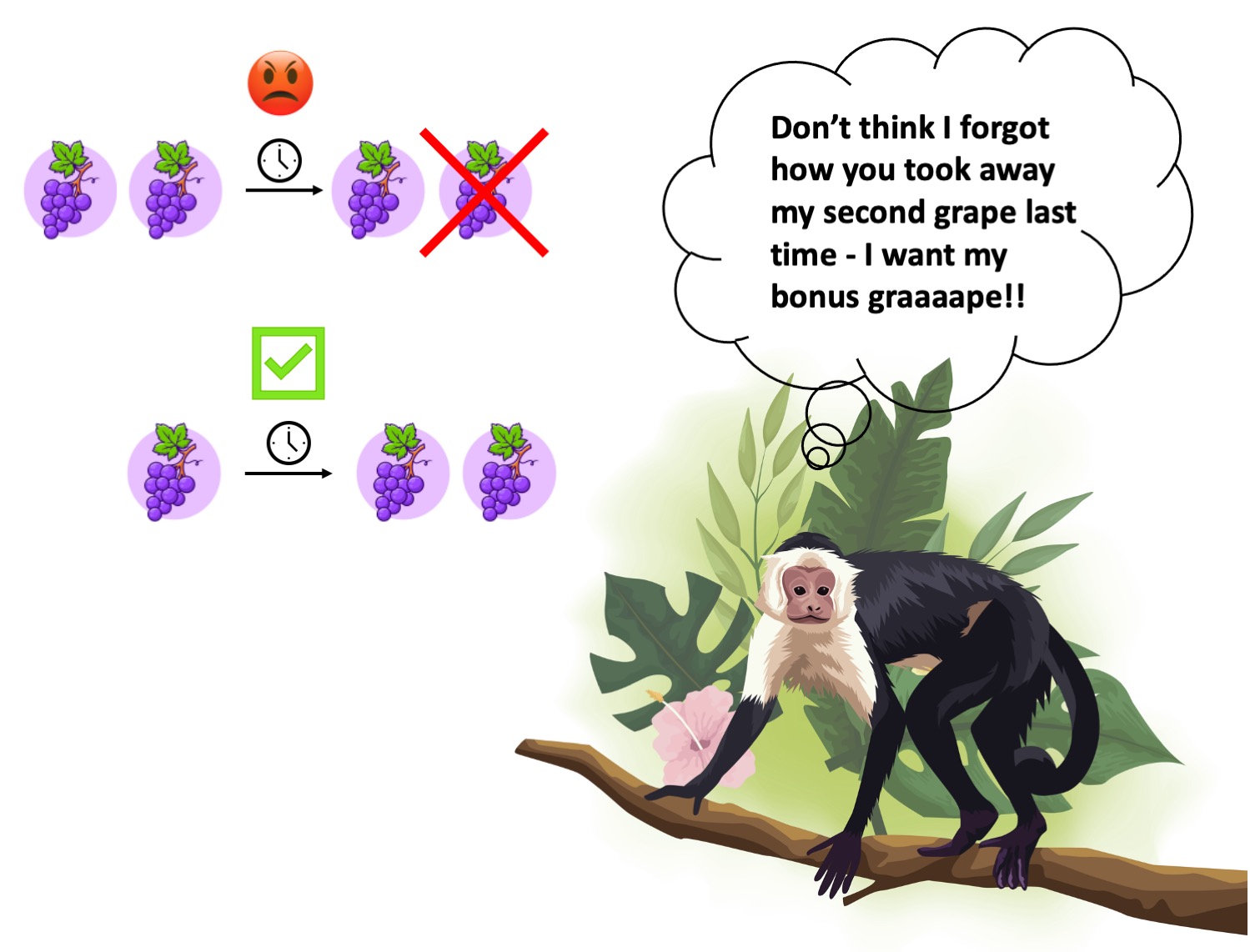 Does loss aversion play a role in all circumstances?

While loss aversion can apply to many domains, to say that it is a psychological principle that we can rely on in all circumstances is an oversimplification.

For example, let’s say you’re playing your friend in a game of table tennis, and they bet you 10 CHF that you will lose. You play and wind up losing the 10 CHF. Your friend then challenges you to double or nothing to get your 10 CHF back. Loss aversion may motivate you to play again to avoid realizing the 10 CHF loss. However, then your friend wins again, and you lose 20 CHF in total to them. The next day your friend challenges you again to another game for 10 CHF. You are feeling good, so you play them again and lose. This time, they may challenge you to double or nothing, but you are less likely to accept based on loss aversion because you’ve learned better. Your friend is just really good.

Similarly, other studies have shown that we’re not loss averse for all types of financial wagers7, and other real-world behaviors - such as overtrading and lack of diversification - can be seen as evidence against loss aversion.

Choices can be framed based on the loss domain to steer decisions. We see appeals to people’s loss aversion everywhere such as messages that a sale will end soon or that it’s the last chance to buy a product before it’s gone forever. For customers who buy cars, they will spend more when they are presented with a fully-loaded model and asked to subtract features compared to when they are presented with a base model and asked to add features8.

Game designers also either use or avoid loss aversion depending on whether they want to terrify players or provide them with a more comfortable playing experience. In the role-playing game Dungeons and Dragons, undead creatures are made especially frightening because they can drain down the level a player’s character has reached in game from having accumulated experience points (XP). Many players feel they would rather die than see their characters lose 50% XP.

These and other examples show us that when we frame choices appropriately, fear of loss can be a powerful motivator for people to take action.

Find out more about how Collabree’s solution leverages loss aversion and other biases by contacting us here: