Present bias is the tendency to overweight present rewards and discount future rewards. We all experience present bias across a variety of choices, and the extent of people’s present bias has been linked to many health-related outcomes as well as to the capacity for empathy. Awareness of present bias as well as individuals’ time preferences can inform interventions to promote healthy behaviors. Our preferences aren’t consistent over time

When presented with these scenarios, people tend to choose the 100 CHF today, however they also prefer the 110 CHF in five weeks. Perhaps you chose the same.

This pattern of choice behavior reflects present bias – or the tendency for people to prefer a smaller sooner reward compared to a larger later reward but to reverse this preference if both the rewards are (near) equally far away in the future1. Present bias runs counter to classical economic models of rationality, which posit that individuals will choose to maximize their utility the same way independent of a delay in the outcome. Basically, you and your future self should agree on your choices and behave in a “time consistent” manner2 3. However, as we’ve all experienced, we don’t. Often, we choose things our future selves would prefer we hadn’t.

In a striking example of time inconsistency in preferences, researchers conducted a field experiment where participants could choose in advance to receive a basket of snacks one week later. The basket consisted of either unhealthy foods (such as chocolate bars, chips, or nuts) or healthy foods (such as bananas and apples). When the basket arrived a week later, participants were allowed to change their minds and switch to the other basket. Even though participants weren’t hungry at the time of ordering or receiving the basket, 74% initially ordered the healthy basket but only 30% opted to keep the healthy food items once the basket arrived. The remaining 70% preferred to enjoy the unhealthy food in the present moment4.

Present bias can be seen across a wide variety of choices involving value. Here are some familiar phrases that we would never hear from someone who plans in a time-consistent manner:

“Next weekend, I’ll catch up on my required work.”

“After this vacation, I’ll start making a budget.”

Not only do these familiar examples reflect time-inconsistency in choices, but they are also always made in a direction to favor present over future gratification:

“In the new year, I’m going to eat more cake and cookies.”

“I plan to drink more next month.”

We rarely encounter these statements. Instead, we discount future rewards and prefer present ones. Discounting future rewards can also lead to procrastination. 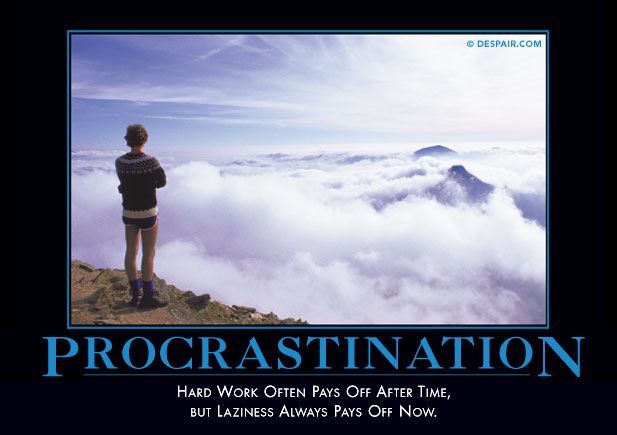 How strongly we discount future rewards varies across individuals. The degree to which we do this has been linked to health-related choices, with individuals that are more focused on present rewards being less likely to participate in physical activity or seek preventative healthcare6. Studies have also shown higher discounting of future rewards in gambling and substance use disorders (e.g. 7 8). Present bias is also a significant contributor to medication non-adherence9. For example, patients with hypertension experience the inconvenience and financial costs of taking medications in the present, but the potential benefits lie far into the future and are not guaranteed for everyone10.

Present bias in the brain

Decisions between immediate relative to future rewards are mediated by two systems in the brain. Brain areas classically associated with emotions and reward processing are more active when immediate rewards are available. One such region, referred to as the ventral medial prefrontal cortex (vmPFC) assesses the value of options and is sensitive to the presence and gain of an immediate reward11 12. A second region called the dorsolateral prefrontal cortex (dlPFC) has been shown to be more active when people choose delayed rewards. How strongly dlPFC communicates with vmPFC is related to how much people discount future rewards. This suggests that dlPFC can influence vmPFC’s assessment of how much weight to give to a delayed reward13. A further study showed that disrupting activity in dlPFC has an effect on how strongly we weight healthy (long-term) or tasty (short-term) attributes in food choices14.

The link to empathy

A recent study also demonstrated the involvement of a brain region that is often associated with taking other people’s perspectives - the right temporo-parietal junction (rTPJ) - in the ability to delay gratification. When activity in this region was temporarily disrupted, people were less able to take the perspective of another person as had been shown before. However, the extent of this temporary inability to see things from another person’s point of view also predicted how much each person was unable to delay gratification or act in a prosocial manner15. These results suggest a similar neural mechanism is involved in empathy, delaying gratification and acting selflessly. It makes sense if you think about the fact that empathy requires you to leave your own egocentric focus and step into someone else’s shoes and acting selflessly requires you to give up something for someone else’s benefit. Similarly, delaying gratification requires your present self to give up something so that your future self can profit. In short, delaying gratification can be seen as empathy for your future self.

Procrastination may be a lack of empathy for your future self.

The fact that we have present bias is frequently exploited in marketing and consumer scenarios. Think of the instant rewards and favorable terms you get when you sign up for a credit card. However, awareness of present bias can also be used to inform interventions to promote healthy behaviors. For example, offering people short-term rewards for healthy behavior can compensate for a lack of intrinsic motivation and encourage long-term habit formation. Some behavioral economics interventions that have taken this approach have shown promise in areas of health including smoking cessation16, physical activity17, and eating habits18.With regards to medication adherence, a review of randomized trials in the United States found that 10 out of the 11 studies that offered patients cash, gifts or vouchers for adherence could demonstrate significant improvements relative to alternative treatments19. Interventions for healthy behavior can also measure individuals’ time preferences in order to tailor the intervention to the individual based on the extent of their present bias and discounting of future rewards6.

Find out more about how Collabree’s solution mitigates present bias by contacting us here: